– Hey, Markus! What format is this head-rotation representation in?

– It is a rotation matrix, I answer. Right handed, z forward through the nose and x through the left ear. Our young newly graduated colleague nods his/her head.

After about 10 minutes I hear my name again.

– Oh no! You have opened Wikipedia? Haven’t you? I answer in despair from my desk.

It happens time to time that a newly graduated engineer (or summer intern) asks me exactly this question. Almost always with the Wikipedia page open at the screen, which I think is horrible (or even worse, some “Learn OpenGL” tutorial).

It is interesting, I get no questions, or only very short questions, on Euler angels, Rodriguez rotations and actually only one recurrent question on quaternions. But very often I get questions on rotation matrices. I think it is a bit odd since rotation matrices are very simple in comparison to many other rotation representations. I think a big reason for this is the Wikipedia page. It looks something like this:

So to interpret this we need to solve the following equation system:

and then we get an “intrinsic rotation whose Tait–Bryan angles are α, β, γ, about axes z, y, x” to visualize in our head.

Its sad because I think rotation matrices are one of the easiest representation to interpret. 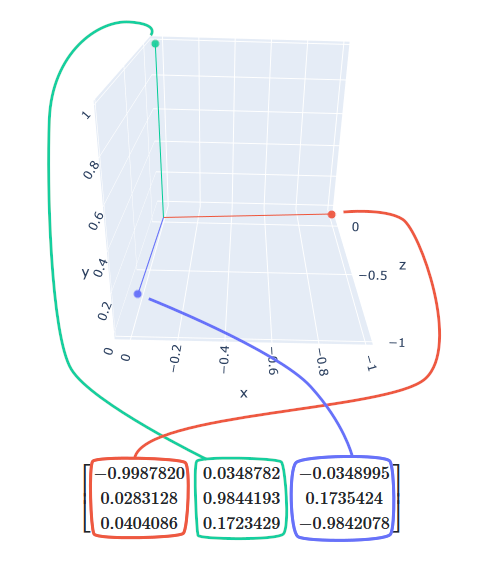 Lets go back to the example with the head expressed in the camera coordinate system and assume the head position is atfront of the camera. So by interpret the previous matrix, we can look at the new z-axis:

We can quickly see that z-part of the z-axis is almost -1. This means the nose is pointing at the opposite direction as the camera, eg. towards the camera if the person is sitting at front of it.

We can also se that the persons head is rotated a little bit up (positive y component of the z-axis) and is pointing a little bit to the right of the camera (negative x component).

And that’s it! Rotation matrices just describe the unit vectors of a new coordinate system.